We are pleased to host the writing of Asia Art Artists who cooperate and consult on our literary tours. The below is from Anthony Tao’s collections of writing, see below for links to Mr. Tao’s Writing.

On top of everything else, Ai Weiwei is a barber. A good one?

Hm. Maybe we’re getting ahead of ourselves. Let’s start here: exactly what kind of haircuts does he give?

“The kind that will make you want to cry,” he said.

“Just don’t make it boring,” I told him.

We were sitting on outdoor benches on Wednesday evening at the restaurant Fodder Factory in Caochangdi, a tiny urban enclave whose intimacy and absence of pretension has attracted some of the city’s more self-motivated and independent artists, filmmakers and celebrities, Ai Weiwei included (he’s lived here for 13 years). Several years ago, there was talk of demolishing this village; now it’s where the kids stake out, as they say: kids who brew their own beer, work for Wu Wenguang, organize documentary festivals, build ridiculous stereo systems on wheels, and brainstorm the sort of projects that become the groundwork for mass-produced creativity.

The haircut was arranged by a mutual friend who works closely with Ai Weiwei and myself. He’s an interesting character in his own right, the type whose thoughts constantly race ahead of his ability to act on them — but by now you’ve probably figured out that interesting ones tend to congregate around CCD. That night, a world-famous chef happened to drop by and bump into one of the more popular China correspondents from the last decade. “Watching the Chinese artist Ai Weiwei advise the Spanish/American chef Jose Andres in the flair and nuance of creating iPhone videos, when they crossed paths this evening in Beijing,” wrote James Fallows.

The Atlantic correspondent asks forgiveness “if this seems self-indulgent,” which seems like a pretty good segue for me to ask the same. There’s nothing newsworthy about a haircut, this: 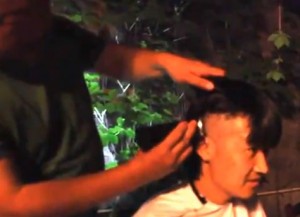 But of course, this is Ai Weiwei we’re talking about, lodestone, dissident, traitor, hero. Everything he does is worthy of something. As the haircut happens — filmed above by Alicia – interested observers gather in a semicircle and hold up camera phones. Only a table of food — much of it, no doubt, ordered by Jose Andres, who had the kitchen fry up a lobster he bought in a market that morning — separates us. And sitting there, one gets a new appreciation for how Ai Weiwei, oversized personality that he is, must understand the cult and farce of celebrity and those who would fawn in the face of it. At the risk of reading way too much into this, perhaps that’s the wry, mischievous reasoning behind his deliberately woeful haircuts: because he knows you — you – will appreciate it, since it came from him. It’s why you’ll wear it for a day, a week, a month after the fact, looking ridiculous because no one else understands the context. You know, however. You got a haircut from Ai Weiwei.

He doesn’t seem impressed. He could make a book out of it, and publishers, marketers, journalists, everyone involved would profit in one way or another. His scraps can be rearranged into manna; his haircuts can turn into 750-word blog posts.

Alas, that’s part of the beauty of Ai Weiwei that often goes unnoticed amid all the other praise: he doesn’t mind letting others benefit off him, even encourages it. He is truly an artist for our digital and social age, generously retweeting online and performing the commensurate act in real life. You hear about his big projects, but he has plenty of smaller ones, too, taken up in his name by assistants and others. I asked before the haircut whether we could film it, and his reaction was such a quick “sure” that it seemed to imply: Did you really need to ask? Want to twist meaning out of a Gangnam video, read cliches into his canvas of work, transform him into a symbol of your worldview? Go for it. It’s not the artist’s job, after all, to create and critique.

To see some more of Ai Wei Wei’s “haircut art” and to read more of Anthony Tao’s stories, you can check out Anthony’s Personal Site  or his writer collective Beijing Cream.

The original story with additional media can be found here:  I got a Haircut from Ai Wei Wei