Saying NO to Dystopia with The Yes Men! – (Part 1) 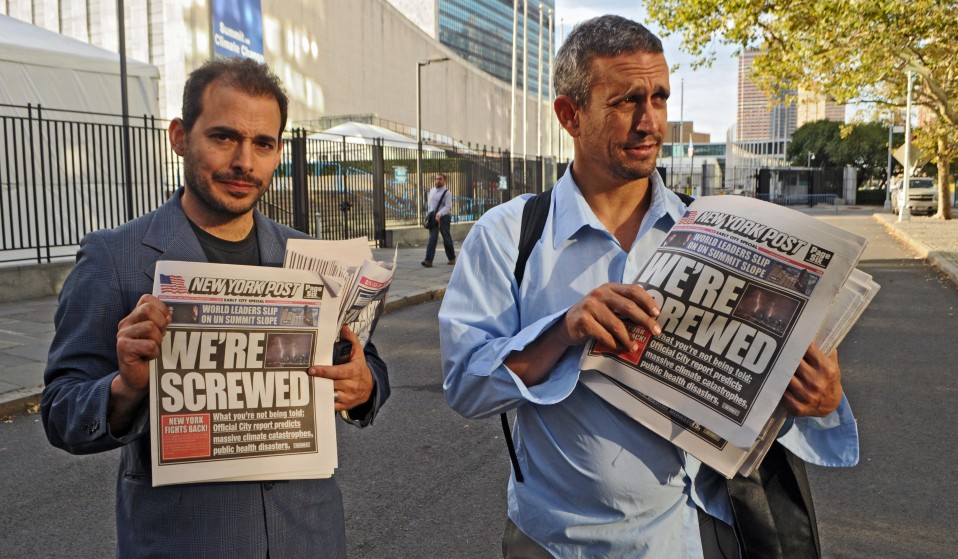 This is two-part interview we conducted with some of the world’s most famous and destructive pranksters – The Yes Men!  Long before Banksy, The Yes Men were (and still are!) using art and satire to take on the world’s largest organizations, governments and corporations.

We spoke with Andy Bichlbaum and Mike Bonanno, the two main minds behind the Yes Men. For more amazing artists like the Yes Men, be sure to check out our tours where we introduce you to the most creative artists and thinkers in Asia.

Asia Art Tours:  Can you explain the history of the Yes Men? Where did you both grow up and what were some early influences on your thinking?

Yes Men: You can see some of this in each of our movies! The Yes Men and The Yes Men Fix the World have some autobiographical components… but probably the most are in our latest feature, The Yes Men are Revolting. That film does a pretty good job of answering your questions!

In a nutshell: we are both the kids of first generation immigrants and holocaust survivors. We both have grandparents that are Holocaust non-survivors. Thats probably a part of our influences! Maybe its not so funny, but it can result in humor after 50-70 years.

AAT:  How did you two first meet and what were the politics of that time which spurred you into action?

YM: We met on the internet. Well, not really, the web was only brand new at the time. But mutual friends introduced us because we engaged in similar mischief. Thats in our first movie! The Yes Men. At the time Andy had been involved in AIDS activism and I’d been doing stuff related to the US attack on Iraq – among other things for both of us.

(In addition to their performance art, the Yes Men have long been adored by many in Hollywood for their creativity and bravery. This trailer from “The Yes Men are Revolting” was produced by Adam McKay (of The Big Short) and gives a great and hilarious introduction to their politics.)

AAT: Before diving into some individual acts of activism, could you discuss your politics now? What are some important frameworks, political goals or processes, theories to explain how your activism and political critiques have evolved?

There were less desperate times, say, 20-30 years ago, when I had anarchist ideas (not anarchy as it has come to be read colloquially, but rather anarchist as in a governance from the ground up rather than top-down). But now with climate change rapidly transforming the ecosystem we are looking to whatever quick fixes can be found and applied.

Any way you slice it, no-holds-barred capitalism is fucking over the planet.

We’ve done a lot of thinking about how our particular form of activism fits into models of change – thats why we work to time our actions in collaboration with specific individuals, groups, campaigns, and movements.

(One of our favorite Yes Men Pranks: The Survivaball. This involved the Yes Men impersonating executives from Halliburton, infiltrating a corporate summit on “Catastrophic Loss” [I.E global catastrophes and how they affect business], and pitching their “Survivaball  to executives who hope to endure the climate apocalypse their business practices unleash. . . the clip has to be seen to be believed.)

AAT: One of your earliest and most famous pranks was setting up a fake WTO Website and then executing a multi-stage hoax against the WTO (World Trade Organization).   Why did you choose to target the WTO?

YM: The WTO at the time was the target of millions of activists globally because it had become a tool of neoliberal economic philosophy. Even their bottom line goal – as expressed on their website at the time – was “to help businesses do business.” In other words, instead of trying to help people, the goals were quite clearly relying on a kind of magical thinking, a religion with a false idea that if you simply make things easier for business everyone’s lot in life improves.

But what was happening, and what continues to happen with deregulation, was that those who had money benefitted at a scale far greater than those who did not. So, understandably, there were global protests, mostly in countries at the receiving end of the problem – the poorer countries or what they used to call the LDC’s (Least Developed Countries) which also we could call, at the hands of Neoliberals, the MFC’s or Most Fucked Countries.

Anyway, there was a huge global movement to combat that at the time. So we joined with that — it was pretty simple politics — the idea of helping the people who were being hurt the most, which intersected nicely with anti-corporate activism that made perfect sense at a time when we hated to see our own cities being turned into homogenous corporate shopping malls.

(Another wonderful prank from the Yes Men, in which they convinced multiple media outlets that Larry Fink (CEO of one the world’s largest hedge fund) was withdrawing positions in any company that contributed to climate change. Fink’s actual letter (and rebuttal) was even more alarming, when he stated that fighting climate change, as outlined in the prank letter, was not feasible since it  was “at odds with near-term profitability”.  . . Let that sink in. )

AAT: As you continued to up the outlandishness of the prank, you received more and more applause. What do you make of this inverse relationship?

YM: I think that in a business context, even if someone sees something quite horrible, they may be impressed if it is pulled off with theatricality! So for example, we unveiled a three foot long golden inflatable penis suit that we claimed managers could use to “see” workers in sweat shops and give them electric shocks to make them work harder. Even though the idea was repulsive, people saw a giant golden phallus instantly erect (using a CO2 charge to instantly inflate) and so of course they were impressed. These conferences are usually way more boring. But also, when we showed a BAD idea like that people were not as excited as they were for genuinely good ideas… like when we posed as the WTO and said it was shutting down. That was something that everyone at the meeting actually got behind right after. Too bad it wasn’t true!

AAT: Last question for Part 1,  we’ve seen a rise in EU Right-Wing parties who offer a Faustian bargain for citizens against Neoliberalism in terms of: both Carrots (removing their nations from global organizations such as the WTO, welfare increases) and Sticks (The brutal treatment of minorities & immigrants to make the majority feel superior and more secure).

Having been inside the belly of the beast, what thoughts do you have on globalization as a positive or negative force, and what should the Left be doing to counter these dangerous platforms of the Right?

YM: The left in Europe and the USA abandoned one of the only things that they had to offer: economic justice. Instead they embraced the Thatcher / Reagan policies, the Blair / Clinton adoption of those right wing ideas and their integration into a centrist, mushy, nothing. The democrats in the USA and Labor in the UK became essential void of politics… just a few social ideas that were more progressive than the parties further right. So that left a vacuum. And in stepped the far right. Its happened before: National Socialism was something that happened in Germany when far right elements took over territory that had been associated with the left. Its super dangerous. The fact that Trump is the guy to curtail free trade to “protect US manufacturing” is very, very scary because its something that works.

The left has to counter with real positive policies and dreams — not with the vague promises of the past 30 years. We are seeing that approach with a bunch of the politicians now – in the USA we have Bernie Sanders, Omar, Ocasio-Cortez, etc. who are not afraid to actually integrate just economic and environmental policies into their platforms, instead of the pro-corporate bullshit thats been stock in trade in US politics for the two dominant parties for the last 39 years!

(Here the Yes Men discuss what logistics went into pulling off one of their most daring pranks, pretending to be Exxon Executives and introducing a new fuel made from humans.  They discuss how they came up with the idea, how they were able to impersonate Exxon and how they get invited into the exclusive and secretive conferences where they unveil their pranks. The whole video is worth watching in full. )

For More information on The Yes Men, please check out their website:

We’ll have  Part 2 with the Yes Men out next week!